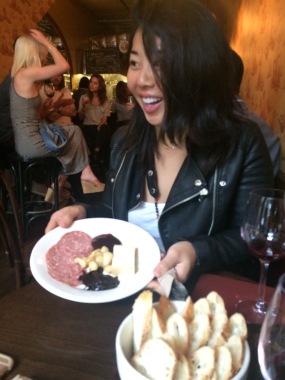 One small excuse for not sharing our culinary adventures in some time: half of our esteemed enterprise, Joni, decided to pull a full Eat Pray Love on us and travel the globe for 5 months. She left us with another delightful blog during this time, which provided some comfort, but I still found myself with an empty hole/crippling inability to post anything. But all’s well that ends well y’all – SHE’S BACK. And within a week she was in San Francisco visiting me, and within about an hour of that, we were baking.

Being reunited with your best bud of 25+ years is an extremely chill experience that only decades of “we cool” can cultivate. Joni showed up in my city, brought me chocolate, I ate it, said I was tired, and she sent me to my room for a nap. When I got up though, I was really stoked and we ate pie. Chocolate bourbon pecan pie, to be more specific.

This pie was originally just another vehicle on which to put whipped cream, because I’m on a serious home-made whipped cream kick these days (more on that later). But this ended up being a lot more than that because chocolate, bourbon, buttery dough…you get the picture.

As many of you know, I have struggled over the years with a serious case of culinary F.O.D. (fear of dough), but I’m working through it with the help of good friends, a pastry blender, and a bottle that I use as a rolling pin (Hey, I may be visiting the world of baking, but I haven’t moved in). But you know what? I’ve realized that even when you make the seemingly unspeakable mistakes they warn you about in all the Super Uptight Baking Recipes, what you get is still pretty damn good. All this “careful not to let the butter melt or your crust won’t be flaky!” – I mean, it is true, but not-as-flakey-as-it-could-be pie dough is still pie dough, knowwhatImsayin?

This recipe is a bit time consuming, but overall straightforward if you go by the book. I paired it with maple whipped cream, but you could easily do vanilla ice cream, cool whip, silly string…hey, I don’t judge. Just add best friend and serve.