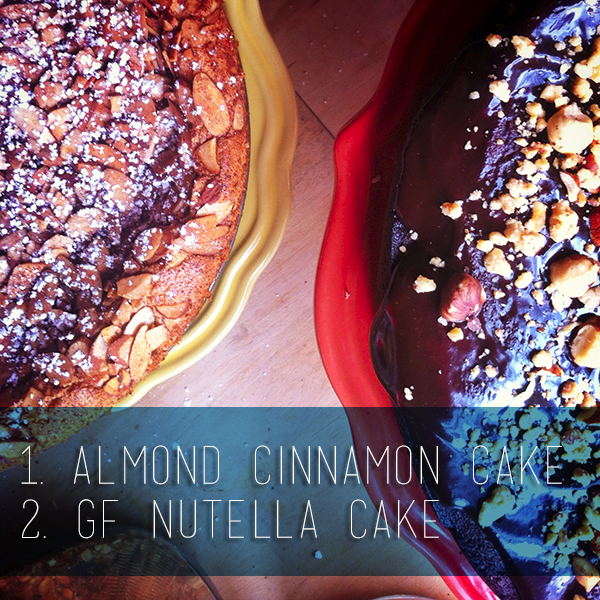 I appreciate diversity. I actually require diversity in every facet of my life – e.g. demographically, culturally, dietarily, in social circles, trail mix, and (of course) in dessert options. Following suit, I recently made these two flourless cakes for a dinner party and then subsequently to celebrate a lovely coworker’s birthday the next day – a total multitasking baking win for no leftovers! The first is a chocolate lover’s dream: a deceivingly light Nutella cake with hazenut dark chocolate and a rich ganache. The second: an airy cinnamon snacking cake made with almond flour, then topped with roasted almonds and dusted with spices. Both are gluten-free (’tis the craze these days, so let’s hop on that bandwagon), using nut flours that I whipped up in my mighty mighty Vitamix. All hail the all-powerful Vitamix! 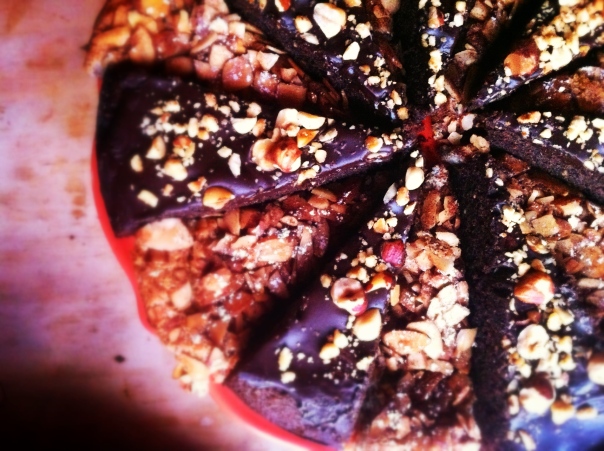 The importance of diversity is really about balance – anything too homogenous automatically becomes uninteresting (and unappetizing – 50 filet mignons in an aluminum vat, gross). Also, I firmly believe that as a baker we can adopt the model that too much of a good thing – when accompanied by other good things – is never a bad thing. People appreciate their options!

I’m not one to throw some red sauce on a pasta and call it an achievement. I usually see people doing that to a pasta and writing about, taking a picture of it, or charging $16 for it, and think “really, that’s it?” Maybe I’m not a pasta purist – although I had no problem living off of spaghetti pomodoro for a month in Italy. But outside of the Old World, where all tomato sauce usually starts in a jar, it leaves something to be desired.

Let me tell you right now, that’s not what this is. To start, it comes from whole canned San Marzano tomatoes, so  friends and neighbors, put your Bay Area tomato snobbery minds at ease. Second, this is Spaghetti All’Amatriciana, which means it’s really about slow cooked onions and pancetta. I had this in Rome and it’s never left my consciousness since. Lots of salty deep flavor from the pork, not to mention a hefty, hefty dose of red pepper, makes this surprising in addition to being no-brainer delicious.

I got this recipe out of some sort of Bachelors cookbook made by Esquire, which is easy enough as it is…then cut the time by about half. I found it long enough to develop those deep flavors, but I’m sure going the whole way with it is even more awesome. I also used regular bacon out of necessity (really Whole Foods? If you can’t find a market for pancetta in San Francisco, where can you?). I thought it would be a bigger deal than it was, but nice thick-cut smoky bacon does work quite well. The recipe actually calls for guanciale, but unless you’re a bachelor trying to impress someone you probably don’t have to worry about pulling out all the stops.

Heat a skim of oil (about 2 tbsp) in a large pot over medium heat. Add pancetta and cook, stirring frequently, until the fat begins to render and meat is no longer pink, about three minutes.

Add onion and stir, coating onions with the rendered fat. Season with salt and pepper and cook, stirring occasionally, until the onions are soft and golden, about ten minutes.

Add the garlic and red pepper flakes and cook, stirring occasionally, until the mixture is aromatic, about ten minutes more.

Add the tomato puree, season with salt and pepper, and bring to a boil. Lower the heat and gently simmer the sauce, stirring occasionally, until it reduces and thickens slightly, the flavors blend, and the fat floats to the surface, about 40 minutes (or as long as you can stand it before it just looks too good and you’re just too hungry).

In a large pot of salted boiling water, cook the spaghetti until al dente. Drain but don’t rinse, return spaghetti to hot pot, and toss with the sauce.

Sam and I just returned from a 10-day, 26-mile trek through the insanely beautiful Panamanian rain forests, beaches and headlands with one of our closest friends. It was, to say the least, a trip of a lifetime. We experienced fairy-tale like circumstances that circulated between The Jungle Book, Peter Pan and Cast Away (minus the Tom Hanks crazy), discovered the art of the salted rim on a perfect Chelada, sweated like mo-fos under 90+ degree weather and 100% humidity, and learned the many ways one can appreciate the kilt (don’t ask). Of course, waking up before the sun rose everyday (EVERY. DAY.) to embark on these treks left us insatiably hungry during the course of our trip, but being the Asian Martha Stewart that I am, I stocked us up with an arsenal of snacks that included dozens and dozens of power bars. We ended up needing every last morsel – I actually ate the last granola bar right before I boarded my flight back to LA. 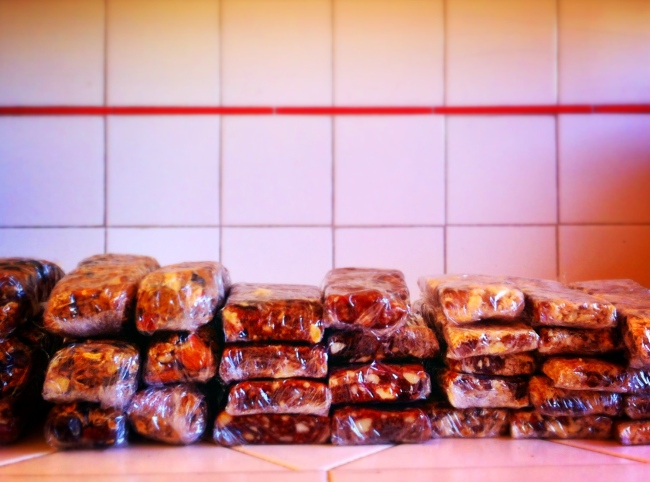 Our stockpile of adventure snacks included the granola bars here as well as two date-based power bars. My dad said (via text) that they were the “bombest protein bars in existence” and I can’t decide if it makes me prouder to say that he conveyed his approval over text message or that he colloquially uses “bombest” as an adjective more often than I do. Nonetheless, his wise words attest to the greatness of the recipes that follow: 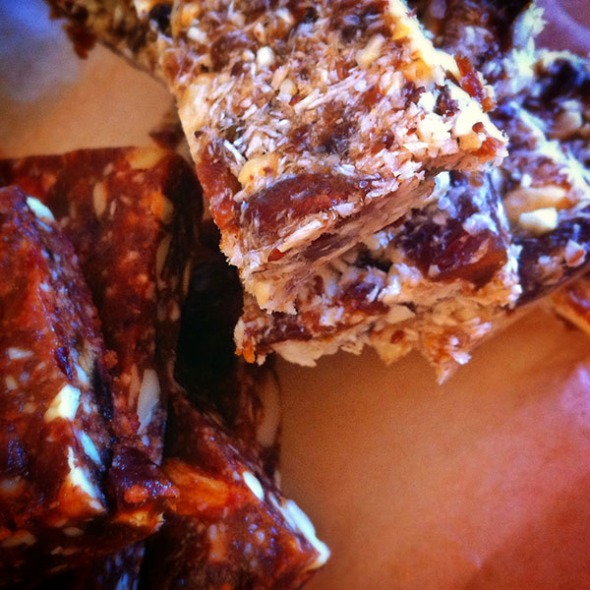 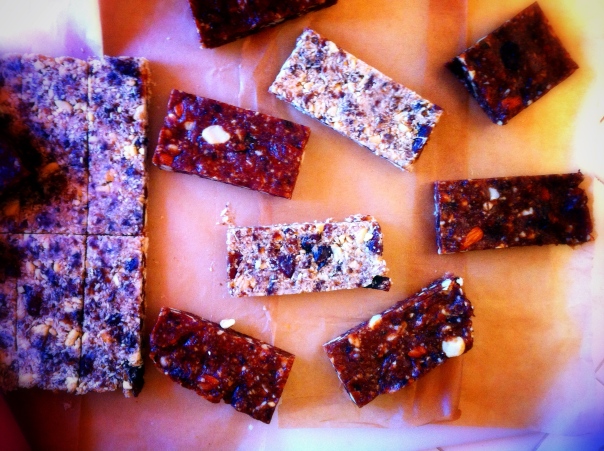 Line a 8 inch baking pan with parchment paper, set aside. Place cashews in a food processor and process until nuts are evenly chopped, set aside. Put dried apricots in the food processor and process for 3-4 minutes to finely chop. Add coconut, oats, agave syrup, coconut oil, hemp seeds, ginger and salt. Process until mixture comes together. Add the chopped cashews and pulse until well combined.

Put the apricot coconut mixture in the parchment lined baking pan and firmly press into pan. Cover the bars and place in a freezer for one hour. Unmold bars, trim ends and cut into even rectangles. Bars will last up to one month if stored in an air tight container in the fridge.